When John Fitzgerald Kennedy was elected as the 35th President of the United States of America, he became the youngest man to enter the White House in the nation’s 185 year history at just 43-years-old. With the country still gripped by the grinding uncertainty of the Cold War, his inaugural address in January 1961 defined his presidency, and offered the citizens of America an enduring message of hope. 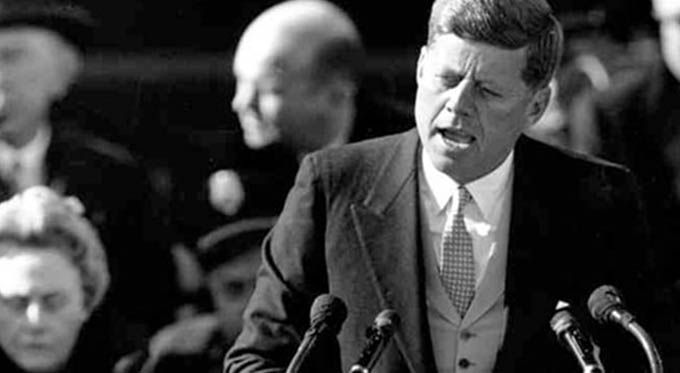 Like the great orators of history – including Winston Churchill and Abraham Lincoln – Kennedy took the writing of his speeches extremely seriously. The speech was crafted by him and his speech writer, Ted Sorenson, who had studied the inaugural addresses throughout history in order to discover the secrets to success, particularly drawing inspiration from Lincoln’s Gettysburg Address.

One of Kennedy’s main techniques was the use of contrasts, using phrases like “an end as well as a beginning”, “renewal as well as change” and, most famously, "ask not what your country can do for you, but what you can do for your country". All of this suggested that the road would be paved with uncertainty, and though he would lead the country, he needed each of his citizens to play their part in its future success.

Kennedy’s words pointed towards the creation of fairer and more equal society - "If a free society cannot help the many who are poor, it cannot save the few who are rich” – as well as maintaining peaceful international relations with nations across the globe.

Impressive though the rhetoric and imagery was, perhaps the defining factor of this speech was that it was broadcast to a mass TV audience in the days when television was still in its infancy. The age of global mass media had dawned, and this was a speech that would be replayed and analysed around the world.

Kennedy’s presidency is remembered as a time of economic prosperity, emerging social changes, and diplomatic challenges that was tragically cut short on November 22, 1963 by his assassination. Over 50 years later, Kennedy’s inaugural address is still remembered as a speech that captured the mood of a nation while promoting the ideals of peace and equality.

Here at the Champions Speakers agency, we have a whole host of after dinner speakers that cover everything from technology, sustainability to business, finance and sports. If you'd like to book a speaker, simply contact us today by filling in our online contact form or by calling a booking agent directly on 0207 1010 553.