As We Remember The Fallen, We Recall Churchill’s Oratory Power - Motivational Speaker Series 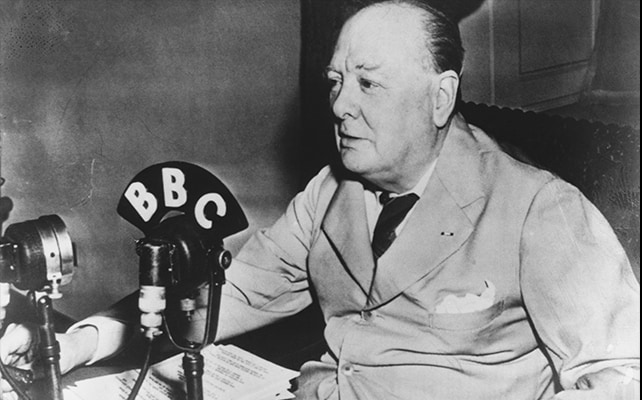 Today, Tuesday November 11th, we stood silent to commemorate and honour all the many thousands of British and Commonwealth service personnel, who made the ultimate wartime sacrifice, laying down their lives, to protect our freedoms. This year’s remembrance services across the country held an extra poignancy as it is 100 years since the outbreak of World War One, the first truly global conflict and the first industrial war requiring our whole society to mobilise in order to face down the threat.

Just over 20 years after World War One’s resolution in 1918, Europe was aflame once more and the freedom of millions across the Continent were at first threatened, then cruelly taken away. Countries and allies were overrun one by one and for some time Britain stood alone against Fascist aggression. On more than one occasion all seemed lost but the British were galvanised as a nation and held firm against the existential threat.

The threat from Nazi Germany was clear for all to see and the British people were resolute in their resistance. Yet warfare is a punishing experience and there were moments when we needed a spark of inspiration to ensure our efforts were redoubled and that our way of life prevailed. Sir Winston Churchill, our leader and Prime Minister, was the figure to provide it.

Despite being born with a speech impediment, Churchill was one of the greatest orators of the 20th century and his rhetorical skills came into their own at the time his country needed them most. In his first speech to Parliament, shortly after taking office and as the Battle of France kicked off in May 1940, he set out his stall insisting he would give his “blood, toil, tears, and sweat” to the coming struggle.

A little over a fortnight later, as the Germans rolled through the Low Countries and into Northern France, British Expeditionary Forces and many Allied troops were cut off and stranded at the Dunkerque bridgehead. Operation Dynamo was launched and thousands of craft, from large destroyers to small fishing vessels, evacuated an estimated 338,000 French and British soldiers from the beaches as the RAF held the Luftwaffe at bay.

In early June Churchill made a speech that immediately went down in the annals of great historic speech and buoyed the nation during its darkest hour.

His words, spoken to the Commons, ticked all the boxes of classic oratory – style, substance and gravitas – and Britain was galvanised not only for the five subsequent years of war but for the looming direct threat of German:

Churchill reinforced the point during his next speech, coining the term ‘Battle of Britain’ weeks before it began in July of that year, but this time his words conveyed hope and he concluded with the immortal phrase that gave the speech its common name – ‘Finest hour’.

“I expect that the Battle of Britain is about to begin. Upon this battle depends the survival of Christian civilisation. Upon it depends our own British life, and the long continuity of our institutions and our Empire. The whole fury and might of the enemy must very soon be turned on us. Hitler knows that he will have to break us in this Island or lose the war. If we can stand up to him, all Europe may be free and the life of the world may move forward into broad, sunlit uplands.”

Of course, the RAF saw off wave after wave of Luftwaffe massed attacks over Southern England that late summer and Hitler turned his blitzkrieg tactics on the Soviet Union in 1941, but Churchill’s speeches, widely broadcast to the British public by way of the wireless, had set the tone. Until that summer many had dubbed the conflict the ‘phoney war’ but it had become very real, very quickly.

Winston Churchill met the seriousness of the situation head-on and spread confidence and a clear sense of destiny. Britain followed his lead and it cannot be denied, with the benefit of hindsight, that the power of oratory displayed by the wily old PM that summer had a tangible effect and brought us all together to meet the challenge.

Champions Speakers have access to a wonderful array of after dinner speakers, covering everything from technology and the environment to business, finance, sports speakers and more. To book a keynote speaker to enlighten or inspire your company’s next event or function, fill out our online form or call us on 0207 1010 553.