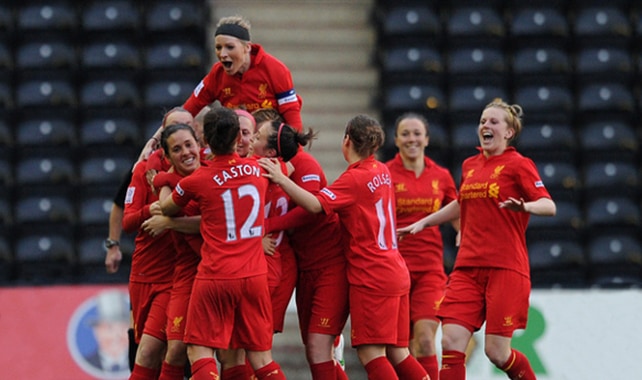 Congratulations to Liverpool Ladies, who yesterday held on to the Women’s Super League (WSL) title in unlikely circumstances. The Liverpool outfit began the final day of the season three points behind leaders Chelsea Ladies and trailing Birmingham Ladies by a solitary point, so their destiny was not in their own hands. Fate conspired, however, to hand them victory after they beat Bristol 3-0 and both their rivals failed to win.

With Birmingham dropping points to Notts County in a 2-2 draw and Chelsea losing 2-1 to Manchester City, it was left to goals from Natasha Dowie and Lucy Bronze, plus a penalty from Fara Williams to complete the Bristol win and retain the title they won last year. Champions Speakers has a wide range of learned football speakers ready to light up your function of corporate event with anecdotes and real insight into the rise of women’s football in Britain.

The 2014 season is the WSL’s fourth since its inception in 2011. Arsenal Ladies FC won the first two titles but their early dominance has faded somewhat to the point where they finished a disappointing fourth this year. The close title race this season speaks of a tight, competitive 8 team league with only Everton Ladies looking below the standard, facing relegation to WSL2 next season.

It is the WSL2’s inaugural year and 10 sides were awarded the requisite license to take part. Their season is as yet incomplete but unless Doncaster Rovers Belles, who have a game in hand, win their final two games and Sunderland AFC fail to win their last, the Wearsiders look set to take the title.

To book Peter Shilton OBE, Peter Schmeichel MBE, Gary Neville or another of our talented football speakers, fill out our online form or call Champions Speakers on 0207 1010 553.