One of the world's most influential women, Michelle Obama stepped on stage at London's O2 Arena on April 14 for the fourth of six Q&As on the European leg of her book tour. Her award-winning memoir, Becoming was released in 2018 and has sold almost 10 million copies to date. 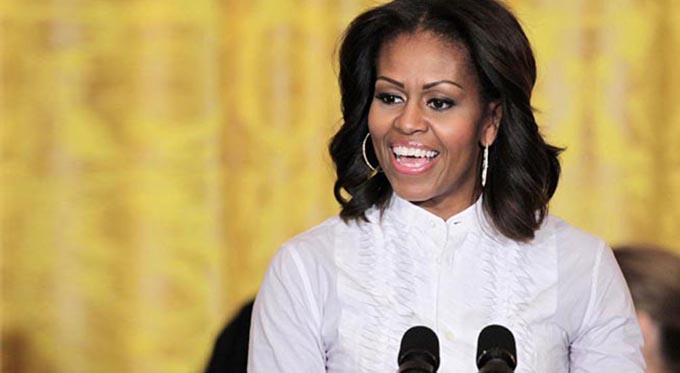 Anticipation was expectedly high ahead of the event, and the crowd were in full voice as she was welcomed to the stage. The reaction to Obama, which included a standing ovation and a series of screams from all four corners of the arena is a tribute to her inspirational, pioneering role in world leadership. Taking to the stage for a Q&A with Stephen Colbert, Obama unravelled her fascinating journey, breaking down the remarkable details of her time at the White House alongside husband and former President Barack Obama.

Renowned around the world for her speaking ability, Michelle Obama was much more than a First Lady during her time in power, she was a beckon of light to so many. Her relentless pursuit of justice, equality and freedom are summed up by her passionate work on healthcare, education, nutrition, physical activity and poverty awareness. Her insatiable desire and dedication to social and political change has endeared her to the world. When Michelle Obama speaks - people listen. This was blindingly obvious at the O2 on Sunday, as all in attendance hung on to Obama's every word, punctuating many of her comments with wild applause. What makes her so captivating?

It is Michelle Obama's passion that ensures her speeches are unshakeable. People were not programmed to like her or to listen to her because she was the First Lady - she made them listen. Much like her husband, Michelle Obama displays authenticity and humility when she speaks, a public speaking skill which has troubled even some of the greatest minds of past generations. It is one thing being passionate - it is another thing altogether - showing it.

Michelle Obama has no problem speaking to the people and instead sees it as a mission to get her vision across to a wider audience. It is down to her own hunger that Obama enjoys the stellar reputation she has today. She could have stood quietly beside her husband during his leadership, but instead, she strived for positive change.

"Now, going high doesn't mean giving up or ignoring reality. It doesn't mean you shy away from the fight or weaken your principles. It means you lead with your whole heart and your whole soul"

It is perhaps Michelle Obama's incredible understanding of who she is and what she stands for that has ensured such admiration for her. Obama has inspired many with insight onto self-awareness, overcoming adversity and hardship, making mistakes, tough decisions and being brave. With pearls of wisdom aplenty, Obama has never shied from providing her own answer to the topics people face today, as well as discussing today's current affairs and the plight of politics. Credible, confident and creative - Michelle Obama is an outstanding female business speaker who cares about every word she says.

"If I'm giving people hope then that's a responsibility, so I have to make sure that I am accountable".

"My parents saw this flame in me...and instead of doing what we often do to girls who are feisty, which is to try and put that flame out, to douse it...because we are worried about not being ladylike or being bossy, they found a way to keep that flame lit because they knew I'd need it later on".

"Our job as women is to do our best at lifting each other up."

Michelle Obama teaches us each day the value in caring about yourself and people around you, no matter the circumstance, showing that she remains one of the most inspirational women in the world today. Inside the latest list of Women Changing the World Today, there is no doubting how important a role model she is.

To book an inspirational speaker to appear at your corporate event, function or conference, simply contact the Champions Speakers agency by filling in our online contact form or by calling a booking agent directly on 0207 1010 553.