Hoggy Blogging for Ladbrokes Throughout The Ashes 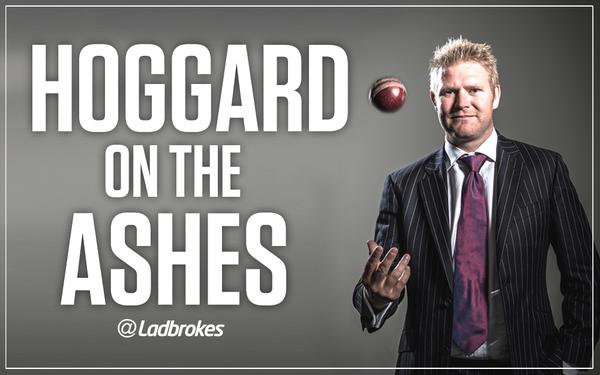 The age-old cricketing rivalry between England and Australia has reignited this summer as the Ashes come to our shores once again, with a notable footnote that it is also the ten-year anniversary of a Series commonly referred to as “the most thrilling of all time”.

As part of their Ashes coverage, betting company Ladbrokes have recruited Champions Celebrity client Matthew Hoggard MBE to write a series of weekly columns, featuring his commentary and opinions on their news website.

His first column coincided with the start of the First Test of the illustrious series at Cardiff on July 7th. In it he discussed and analysed everything from the players on both teams, their likely tactics and how he saw the game panning out. He was quietly confident of England’s prospects, despite bookmakers pricing Australia as favourites.

England ran out comfortable winners in just four days and now look to push home the advantage in the Second Test at Lord’s, the home of cricket. When Hoggy played back in 2005, however, it was a different story. The Aussies started the stronger with a 239-run victory in the first Test at Lord’s, before England dramatically turned it around by winning two Tests – one of them by just two runs – and drawing two to clinch the series.

Matthew was a key member of that now-legendary England team as he scored 8 not out in the fourth Test at Trent Bridge to help England win by three wickets and take a 2-1 series lead that would ultimately win back the famous urn for Duncan Fletcher’s side.

A 6’2” right arm fast-medium bowler and right-handed batsman, Hoggy played international cricket for England between 2000 and 2008, taking 248 wickets in 67 Test appearances and 32 in 26 One Day International games, making him one of this country’s greatest ever bowlers.

He is now one of the nation’s best loved TV sports personalities and has also become one of the most in-demand after dinner speakers on the circuit.

For more information on booking Matthew Hoggard MBE for your event, contact the Champions Speakers agency on 0207 1010 553 today.