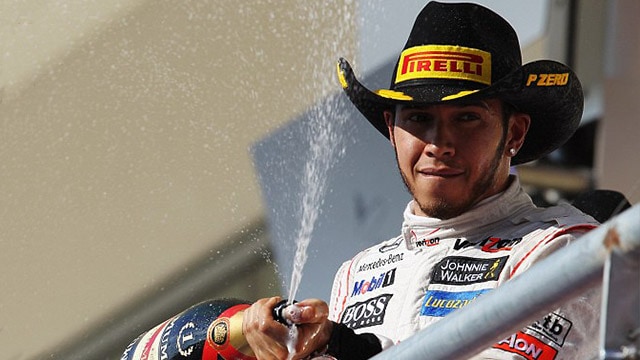 Lewis Hamilton made British racing history yesterday when he broke the record for the most wins by a UK Formula One driver at the US Grand Prix in Austin, Texas. His tenth victory of the 2014 season, and his 32nd overall, took him past Nigel Mansell’s long-standing mark and further consolidated his Drivers Championship lead over Mercedes-Benz teammate, Nico Rosberg, with just two races to run. With a 24 point advantage, Hamilton is now odds-on to take his second World title in Abu Dhabi in three weeks’ time.

Now sitting fifth on the all-time list of Grand Prix winners, behind Michael Schumacher, Alain Prost, Ayrton Senna and Red Bull’s Sebastian Vettel, and not thirty until next year, Hamilton now has the opportunity to place himself firmly among the pantheon of truly great Formula One drivers. Champions Speakers has access to an ever-growing stable of high octane motorsports speakers to add a bit of glamour and automotive know-how to your corporate function, so why not hire Johnny Herbert or Sir Stirling Moss OBE as keynote speakers at your next event.

Pole-sitter Rosberg was too quick off the grid for Hamilton but the Briton showed a telling mixture of patience and killer instinct to, first, reel in his rival and, second, outfox the German with a brave late-braking manoeuvre going into the hairpin at Turn 12. With the extra grip of a fresh set of tyres, Hamilton seemed to surprise his teammate as he threw himself down the inside of what is Austin’s tightest corner. Rosberg could not recover from a move that exemplifies the impressive recent form of Hamilton, who went on to notch up his fifth consecutive win, one more than Rosberg has managed all season.

Formula One now travels to Interlagos in Brazil for the season’s penultimate race this weekend and, with the Mercedes-Benz cars both having been so dominant all year, few would dismiss the idea of yet another one-two for the team. The same can be said for Abu Dhabi a fortnight later but even with double points on offer at the Yas Marina Hamilton can still afford to run in second behind Rosberg in both races and still take the title. Yet few expect him to let up in the aggression that has seen him unbeaten since the pair collided in Belgium back in August or to give Rosberg the smallest glimmer of title hope.

To book Nigel Mansell OBE, Jody Scheckter, Sir Jackie Stewart OBE or indeed any other of our impressive grid line-up of top class motorsports speakers for your upcoming corporate event, fill out our online form or call Champions Speakers  on 0207 1010 553.