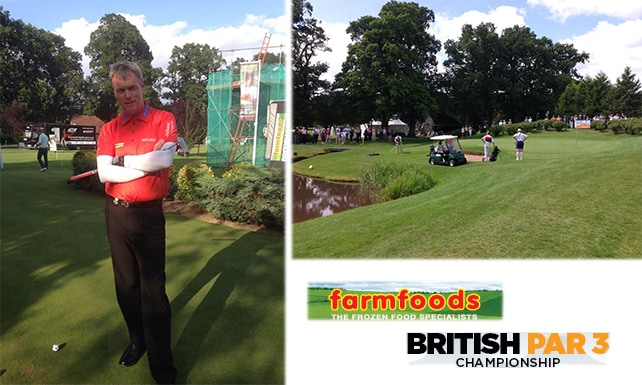 After months of preparation and fevered anticipation, the Farmfoods British Par 3 Championship has finally teed off at Nailcote Hall in Warwickshire. Chock full of genuine golfing talent and stars from the worlds of sport and entertainment, the event is being hosted by two-time Major winner and the most successful Ryder Cup captain of all time, Tony Jacklin CBE. Tuesday’s Celeb-Am Stableford contest showed from the outset the quality of the assembled field.

The Champions Speakers agency is, as ever, very well represented on the Cromwell Course, with the four day tournament featuring many of our best golf speakers and sports personalities, including the likes of the greatest all-round cricketer in history, Sir Garfield Sobers, Ian Woosnam OBE, 2003 Rugby World Cup winning flanker, Neil Back MBE, Ashes hero, Matthew Hoggard MBE and ‘Mr Maximum’ himself, Willie Thorne.

Tuesday got off to a flyer with the crowds having to wait only until 8.30am to see their first hole-in-one. In fact former Aston Villa, Bayern Munich and Scotland striker, Alan McInally was so quick off the mark with his dream shot that it was arguably too early for many spectators still finding their way on to the course. That said, the excitement was unrelenting all day.

European Senior Tour professional, Gary Wolstenholme MBE, ran out victorious in the individual event scoring an impressive -4 to take the win. He was pushed all the way though by Tony Jacklin, who rolled back the years to show he still has a strong short game. Others to achieve notable individual scores were Challenge Tour professional, Mark Murphy, former Ryder Cup player Peter Baker and ex-Manchester United goalkeeper Peter Schmeichel MBE.

Wolstenholme’s wonderful performance helped his four, Farmfoods 2, to the team title with a combined total of -14. Tiger Foods came a strong second, ably assisted by Mark Murphy, and Larry Laoretti was on hand for Farmfoods 3 to take third in what was a successful day for the tournament’s primary sponsor.

The serious business began on Wednesday 6th August as professionals and amateurs alike embarked on their pursuit of the Farmfoods British Par 3 Championship title. With an impressive £100,000 prize fund to play for, competition will undoubtedly be tough and, if the earliest signs are anything to go by, closer than we could ever have wished for.

Make sure you keep up with all the action here or on Twitter @BritishPar3 or even better visit the British Par Championship website to find out more or to pick up a last-minute ticket.

To book Tony Jacklin MBE or indeed any of our other first class golf speakers or sports personalities for your function or event, fill out our online form or call Champions Speakers on 0207 1010 553.