This year was no different seeing the likes of AFC Flyde, Woking and Hereford being in the draw with the might of Manchester United, Arsenal and Liverpool. The standout tie in last night’s draw saw Merseyside rivals Liverpool drawn against neighbours Everton in what is sure to be a blockbuster clash. 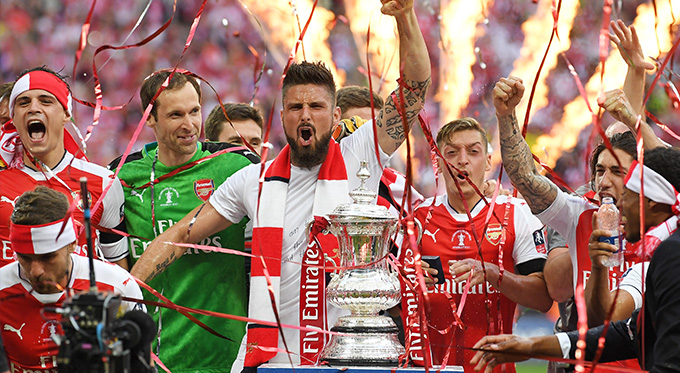 Olivier Giroud of Arsenal celebrates with the trophy after the FA Cup Final between Arsenal & Chelsea.

The first time the two teams have been drawn against each other in the third round for 85 years, both clubs have a rich history in the FA Cup. Liverpool have won the trophy seven times and Everton on five occasions and the fixture has produced some of the most iconic games in the competition.

Back in 1991 the sides played out a historic 4-4 draw in the fifth round, and in 1989, in the wake of the Hillsborough disaster, the club’s met in the final with Liverpool coming out on top 3-2 after extra time. However, Everton can draw confidence from the fact that they have never lost an FA Cup tie at Anfield where the match will be played in January.

The competition’s lowest-ranked side, Hereford will face 2016 Premier League champions Leicester City if they overcome a replay with Fleetwood Town, National League team AFC Flyde will also be treated to a Premier League encounter, facing Bournemouth if they can beat Wigan.

Woking will come up against seven-time winners Aston Villa if they defeat Peterborough in their replay. Current holders, Arsenal have won three of the last four FA Cups and they face Championship side Nottingham Forest in the third round. 12-time winners Manchester United will also face Championship opposition in the form of Derby County.

All ties will be played on the weekend of 6-7 January 2018 with the magic of the FA Cup sure to sparkle once again.

Here at Champions Speakers agency, we have a whole host of fantastic football speakers on our roster who are all experienced in talking about the FA Cup. From players who have participated in the biggest games in the competition’s history, to past winners, we can provide you with the perfect person for all events and conferences.

For booking information, get in touch at 0207 1010 553 or complete our online contact form today.