The countdown is well and truly on for the 2016 Rio Olympics. With just 282 days to until the Olympic flame is lit once again, the Great Britain team is slowly taking shape, as more and more athletes make the cut and will be given the chance to showcase their talents at the very highest level. Team GB has given us hundreds of special moments at the Games, with the likes of Sir Mo Farah, Jessica Ennis-Hill CBE, Greg Rutherford MBE, Sir Chris Hoy MBE, Laura Kenny and many more lighting up London 2012, not to mention countless other national treasures in previous years. 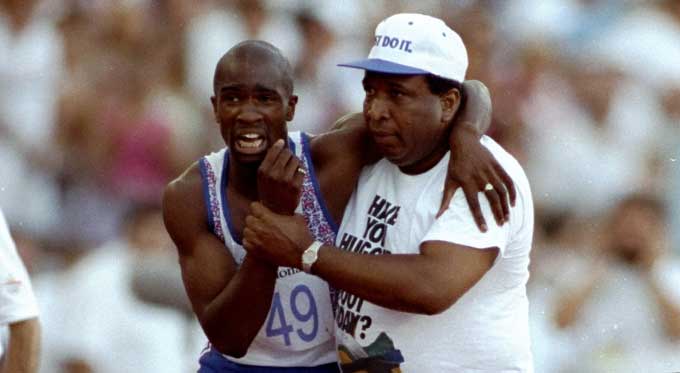 When it comes to standout Olympic moments, it doesn’t always boil down to victory; sometimes, perseverance and symbolism can leave just as much of an impression. When Derek Redmond took part in the semifinals of the 400m at the 1992 Olympics in Barcelona, his dreams of clinching a precious gold went up in smoke when his hamstring snapped in the back straight.

What happened next was beyond the imagination of all those whose eyes were cast on the race; he refused to get on a stretcher, stood up and continued the race limping. His father, Jim, then barged past security and joined Derek as the two completed the lap of the track together, a moment that prompted a standing ovation from 65,000 and millions of emotional tears all around the world.

The incident wasn’t just memorable on British shores – it was the subject of one of the International Olympic Committee's Celebrate Humanity videos, while Visa and Nike also used footage from the incident for a series of poignant and touching adverts. Two decades on, Derek has rebounded from the disappointment of the race to carve out a career as an after-dinner speaker, where he discusses his career and the Barcelona incident in extensive detail, whilst also proving a fantastic event host.

To book Derek Redmond as the olympic speaker for your corporate event, function or conference, simply contact the Champions Speakers agency by filling in our online contact form or by calling a booking agent directly on 0207 1010 553.