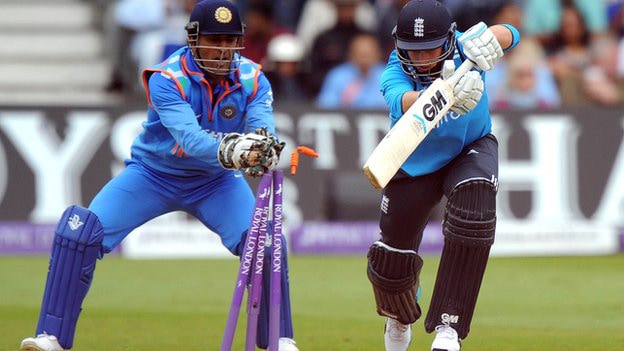 With a huge range of cricket legends, such as Matthew Hoggard MBE on our books here at Champions Speakers, we are constantly at the forefront of breaking news from the world of cricket. With that in mind we reflect on the England vs. India ODI we all saw over the weekend.

After England’s six wicket defeat to India on Saturday, Captain Alastair Cook has defended his nation’s approach to the game. After a strong start, England collapsed at 82-0 to post a lacklustre 227 at Trent Bridge. Losing six wickets to spin and only hitting one boundary between the 18th and 44th overs.

However Cook was quick to remind people of the reality of playing at such a high level of international cricket. “You don't go in there when you lose wickets and keep whacking boundaries.

"I don't care what anyone says. Not many people come in on a turning wicket and whack it straight away."

Cook and his opening partner Hales shared a half century opening stand before the introduction of spin bowling caused a collapse of 6-57.

"We got off to another good start and to be bowled out for 220 is incredibly frustrating. A lot of wickets have fallen to spin in this series for us. We need to improve on that". Edgbaston will host the penultimate ODI tomorrow, before the series comes to a conclusion at Headingley on Friday.

To view our extensive roster of cricket speakers, simply browse our website or alternatively call our Champions Speakers' after dinner team today on 0207 1010 553.