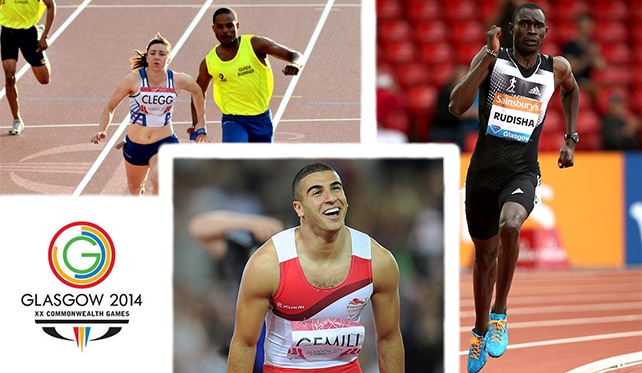 The Commonwealth Games have been building a real momentum over the course of the last 24 hours in Glasgow. In recent days we have seen wonderful excitement in the Sir Chris Hoy Velodrome, in the Triathlon and in many other disciplines but the athletics competition is now lighting up the Clydeside Games. Hampden Park has undergone quite a transformation, from national football stadium to Glasgow’s showpiece arena, and couldn’t be better suited to this athletics meet.

Last night, Monday 28th, saw English success in the blue riband event, the Men’s 100m final, as 20-year-old Adam Gemili finally came of age as a sprinter to finish with silver behind the Jamaican favourite, Kemar Bailey-Cole. The Kent runner, who gave up on a potential professional football career to pursue his dreams on the track, can take great confidence from his performance and will now look to use Glasgow as a platform to further medals.

Gemili’s smile was matched only by that of Scotland’s Libby Clegg, who had earlier raced to gold in the Women’s Para-Sport T12 100m and lapped up the adulation of the home support. More Scottish success came on Tuesday when Eilidh Child qualified easily for the Women’s 400 Hurdles final and hopes are high that she can overcome another Jamaican gold medal favourite, Kaliese Spencer, in Thursday’s final.

The Decathlon competition will come to its conclusion tonight with English prospects John Lane and Ashley Bryant pushing Canada’s Damian Warner for gold, but perhaps the evening’s most anticipated event will be the Men’s 110m Hurdles Final.

England’s William Sharman and Lawrence Clarke will have to challenge the Caribbean’s sprint dominance without their compatriot and Commonwealth Champion, Andy Turner. Earlier on Tuesday Turner, who won the European title in 2010, went out in the heats having caught the first barrier and crashed through the second before pulling up and admitting to a ‘schoolboy error’.

The English were more fortunate in Long Jump qualification with both Chris Tomlinson and JJ Jegede missing the automatic qualifying mark of 7.90m but coming through in the top 12. Their teammate and 2012 Olympic Champion, Greg Rutherford, had things rather easier, needing just one jump to head the field with 8.05m. He said afterwards “Technically it was an awful jump but it did the job."

Another highlight of Tuesday afternoon saw the majestic David Rudisha, cruise through qualification in the 800m and he now appears odds-on to complete a triple crown of Olympic, World and Commonwealth titles. No one in the Glasgow field can compare with the Kenyan world record holder, who dominates the event every bit as much as Usain Bolt in the 100 and 200 metres (when fit).

The athletics programme continues until Thursday with the Home Nations hoping to add to their medals tally and with England looking to overhaul Australia as top dog in the overall table.

To book Sir Chris Hoy, Daley Thompson CBE or indeed any one of our other top class sports speakers, fill out our online form or call Champions Speakers on 0207 1010 553.