The day is finally upon us. After a long wait of three years and 11 months, the Rugby World Cup gets underway on our very shores this evening, with hosts England kicking off six weeks of high-tempo rugby action against Fiji at the prestigious Twickenham Stadium.

As the home nation, Stuart Lancaster’s charges will be under pressure to deliver, but knowledge of their predecessors having reached three finals in previous years means that the winning mentality is there – put simply, England are one of the greatest rugby nations in the world. 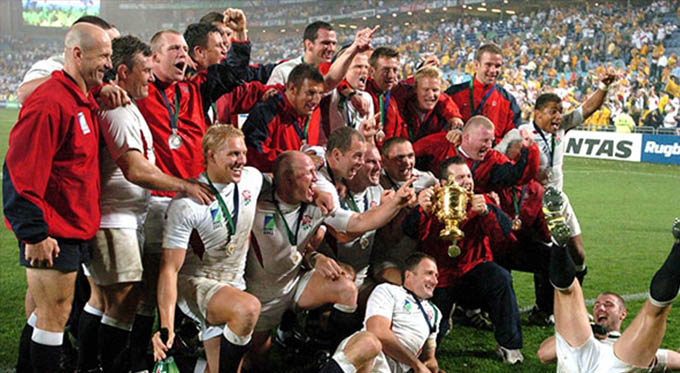 The team’s pinnacle, without a doubt, was in the 2003 World Cup, when Sir Clive Woodward led them to the Webb Ellis Cup with an extraordinary 20-17 win against Australia on their home patch and turned a squad of well-drilled and skilled hopefuls into bona fide legends of the sport.

With a plethora of inspirational anecdotes and a place in history, England’s class of 2003 are the perfect choice for a wide array of events including motivational, business, and of course rugby.

Champions Speakers exclusively manage Neil Back MBE, a key component of that World Cup-winning outfit. A wonderful character with the sense of humour to match, the openside flanker – who captained Leicester Tigers and England throughout his illustrious career – has become a prominent after dinner speaker and event host, ensuring guests have a great time at events as well as allowing them to meet one of their sporting idols.

The tournament win in Australia was a collective effort which saw the team gel perfectly, and at the heart of it all was Martin Johnson CBE. Standing at a colossal 6 foot 7, the captain of the class of 2003 is considered one of the greatest locks of all time. In addition, he toured three times with the British and Irish Lions, captaining that side twice, and led Leicester Tigers to consecutive Heineken Cup victories and six league wins.

An eloquent and articulate sports speaker who always is in demand, Martin regularly makes television appearances and is a regular on the after dinner circuit for large corporate clients eager to get the lowdown from one of the all-time greats of the gentlemen’s game.

Although England were a workmanlike team where every single component was essential to propel them to the Webb Ellis Cup, one man claimed the spotlight for delivering on the most visible aspect of the game – the scoreboard. That man was Jonny Wilkinson, holder of the Rugby World Cup points record and scorer of the now-legendary drop goal that clinched the win over the Aussies.

The former Newcastle Falcons and Toulon fly-half did so much more than immortalise the tournament through his drop goal – he also kicked all of England’s points in their 24-7 win over France in the semi-final, helped his side unexpectedly reach the final in 2007, and toured twice with the British and Irish Lions. All this experience makes him a perfect fit for your sporting event – if your guests aren’t too starstruck by the man himself!

Behind every successful team is a successful manager, and Sir Clive Woodward, the man whose management led England to the 2003 World Cup, is one of the most highly-rated in the game. Tasked with transforming the England side from the amateur era into the professional one, he developed the perfect blend of skill, workmanship, grit and flair, before sending them out onto the pitch with the right tactics to beat opponent after opponent on the way to the Webb Ellis Cup.

In keynote speeches, Clive demonstrates the power of collaborativfeste leadership, highlights how to create a winning mindset, and unpicks the DNA of a champion, making him perfect for both sports seminars and business conferences.

If you wish to book these, or any other members of the 2003 rugby World Cup-winning squad with the Champions Speakers agency, simply fill in one of our online contact form or call a member of the team today on 0207 1010 553.