A whole host of British sporting heroes gathered at Birmingham's Genting Arena to see Andy Murray be crowned BBC Sports Personality of the Year for a record breaking third time. 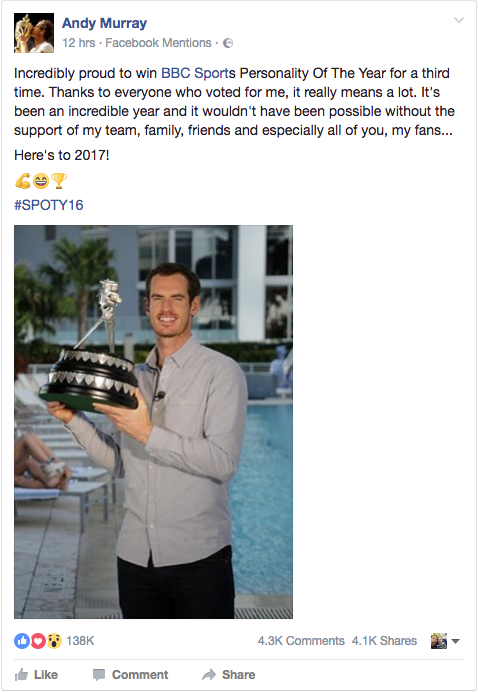 The newly crowned world number one topped off a historic year by accepting the award from his Miami training camp. 2016 has been a superb year for the Scottish tennis star after he won Wimbledon for the second time, defended his Olympic gold medal in Rio and knocked his old adversary Novak Djokovic off the top off the world rankings.

Murray, who also took the prize in 2013 and 2015, said: “I'd like to thank everyone who voted. I really appreciate your support. And I'd like to thank my team - they make a lot of sacrifices for me; they're away from their family at times of the year like this."

Triathlete Alistair Brownlee, who defended his Olympic triathlon gold medal in Rio this summer, was named runner up with show jumper Nick Skelton in third place.

Premier League champions Leicester City were also honoured during the ceremony with the Team of the Year award. Their miraculous rise from relegation favourites to title winners has been well documented and, in front of 12,000 people in Birmingham, the entire squad were present to relieve the fairy-tale. Manager Claudio Ranieri was also celebrated on the night, being named the 2016 Coach of the Year.

American gymnast Simone Biles was named as Overseas Sports Personality of the Year following on from a stunning Olympics in Rio where she won four gymnastic gold medals whilst legendary swimmer Michael Phelps, the most decorated Olympian of all time, won the Lifetime Achievement award. It has been a wonderful year for Phelps who came out of retirement to compete in the Olympics in Rio and swiftly added a further five gold medals, taking his overall tally to 23.

With 16 nominees, this year was the biggest Sports Personality of the Year to date, and any of the athletes on the list would have been deserved winners.