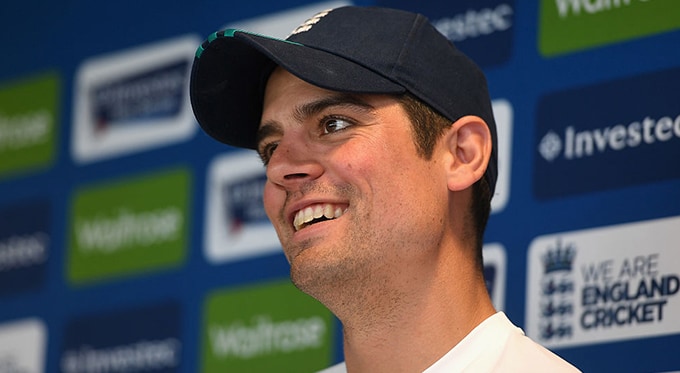 After a record 59 matches in charge, Alastair Cook CBE has today announced he will be stepping down from his role as Test captain. He will continue to play for his country, with England not playing Test cricket again until their series against South Africa in July.

England managing director Andrew Strauss hopes to have a new captain in place by the time England travel to the West Indies for their ODI series in early March, with Joe Root the overwhelming favourite for the role. One of the most famous cricketers in the world, Alastair has broken countless records during his international career.

After an underwhelming 2016, which included an embarrassing 5-0 Ashes series whitewash against Australia and a 4-0 Test series defeat to India, many pundits within the sport had been predicting that Cook may step down. They have been proven right, but the Essex batsman still has fond memories of his five years leading the side.

He said: “Stepping down has been an incredibly hard decision, but I know this is the correct decision for me and at the right time for the team. It’s a sad day personally in many ways but I want to thank everyone I’ve captained, all the coaches and support staff and, of course, the England supporters.

Playing for England really is a privilege and I hope to carry on as a Test player, making a full contribution and helping the next England captain and the team however I can.”

The highlights of his reign as captain include winning the Ashes in 2013 and 2015 as well as away victories against India in 2012 and South Africa last year. Following his resignation, both current and former players have been lauding his contribution to the England team.

Timing in life is everything .. and once again Alastair Cook has got it spot on .. A Great man who I hope plays on for many more years #Cook

ECB chairman Colin Graves said: “As a batsman, he’s one of the all-time greats. We owe him our gratitude, thank him for his commitment to England and look forward to watching him score plenty more runs for England.

His leadership has brought some huge successes for the England team and even in difficult times he has always shown his character, stayed composed and seen things through.”

To book Alastair Cook CBE or any of our wonderful cricket speakers for your event or conference, complete our online form or call us on 0207 1010 553.